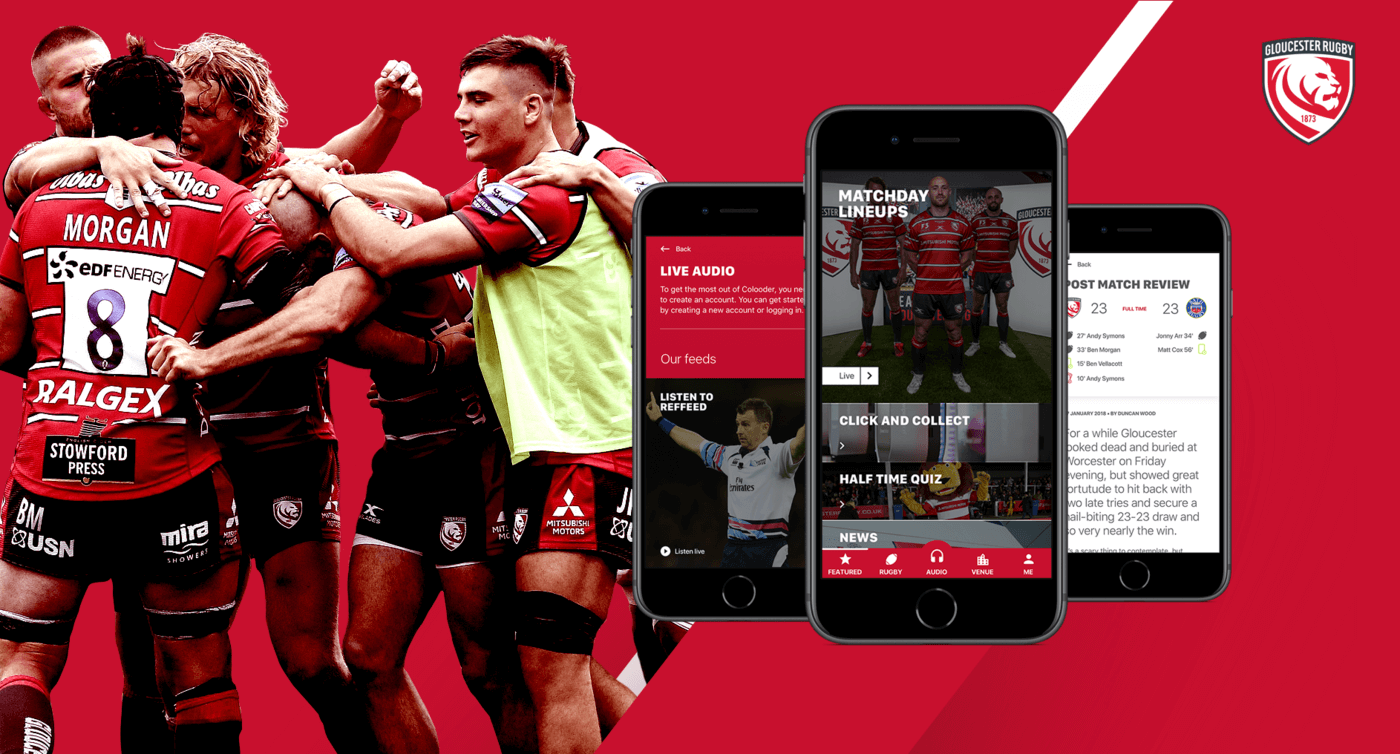 The stadium experience for fans has changed little over time. Gloucester Rugby had a vision of a connected stadium where fans could access a superfast Wi-Fi that would enhance their match day experience, reduce busy bar queues, gather invaluable data on behaviour, increase club revenues and improve services.

With so many suppliers offering different services with their own proprietary platforms at Gloucester Rugby from ticketing, merchandise and food & beverages, Colooder recognised that fans are faced with disaggregated digital experiences.

Their aim was to unify the club’s physical and digital ecosystems to give fans the best possible experience. Colooder's mission at Gloucester:

1. Bring together and integrating with Gloucester Rugby’s various suppliers and technology.

2. Create a mobile app that gives Gloucester fans access to great content and services - such as audio feeds, quizzes and Click & Collect to avoid queues - that simply make fans' experience of match days better than ever and in return provide genuine value.

3. Leverage technology to bridge the gap between the physical and digital worlds.

The result has been the development of a fan experience platform, which has been integrated into the new Gloucester Rugby fan app. Launched in September of this season, the new app brings a range of new experiences, features and content to fans - and is continually being developed with a focus on ‘filling the gaps’.

Downloading the app allows visitors to Kingsholm Stadium access to unrivalled Wi-Fi connectivity. With so much bandwidth available, fans are able to get closer to the action than ever before by listening to the ref's voice through the app with near zero latency - a first in the UK - as well as vote for Man of the Match, take part in the Game of Holms Quiz and much more!

To make their experience at the stadium even better, the app also allows fans to Click & Collect food and beverages or even have them delivered directly to their seat!

And when they aren't at the stadium, Gloucester fans can stay in the know thanks to their official podcast - The Podding Shed, as well as being kept informed with regular push notifications for any breaking news and important club announcements.

We are firmly in a digital world and part of the ‘future proofing’ of the club going forward is to ensure we are at the forefront of technology that allows us to give everybody that visits Kingsholm Stadium not only fast connectivity but also gives us the ability to engage our audiences better.
Stephen Vaughan, Gloucester Rugby CEO

With many more features on Colooder's roadmap, fans at Gloucester can expect a lot more ahead of the new season, allowing the club to foster an even closer bond with its supporters. For Gloucester Rugby as a business, the app brings together their ecosystem of services and third party suppliers into a integrated app that will:

Download the app now on iOS or Android to get in on the action!‍

WOW
Look At This Stat
X Million
Engagement
800K
Something Else

With all of the hype and prospecting surrounding NFTs, we’re helping clients find practical real-world uses for blockchain technologies.